In 1902, class, elegance, and beauty were captured in the white, glazed walls of the Gilded Age’s treasured property known as Rosecliff.  It has been used several times as the backdrop for movies, and even opened its doors for several of those big screen scenes to be shot in its luxurious rooms. Costing $2.5MM to build in the early 1900s, this ocean front beauty has secured itself as one of America’s most famous addresses on Bellevue Ave. 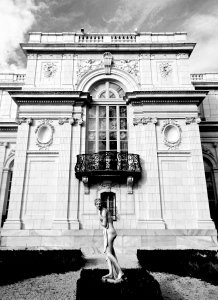 Born in Virginia City, Nevada, Theresa Fair was raised the daughter of a successful Irish immigrant family. Her father James Graham Fair, along with his partners, sought out to earn the big bucks in the California Gold Rush. In 1859, the group struck silver in the Comstock Lode. They may not have known at the time, but that deposit of precious metal would generate over $500MM over the next two decades establishing them as one of America’s wealthiest families.

Theresa, or as her friends called her, Tessie, longed for something more than to simply exist in the southwestern community. Her heart craved the fast paced life of the northeast, which led her to New York City. The city was filled with extremely wealthy residents, and those residents summered in a beautiful cliff lined, coastal community in Rhode Island. With the lure of grandiose estates and even grander lifestyles, Theresa Fair found herself playing tennis at the Newport Casino where she met Hermann Oelrichs.

looking out over the Atlantic from Rosecliff.

Oelrichs was a successful man from a successful family. He served as an agent for the North German Lloyd steamship line. With a prominent role established in the high society of New York, Fair was instantly drawn to him. In 1890, Tessie became Theresa Fair Oelrichs, the wife of Hermann Oelrichs.

After receiving a gift of $1MM from Theresa’s father (which is a little closer to $25MM in today’s currency), the newly in-love couple decided Newport was to be their summer residence. Theresa and her sister Virginia bought a property along with 11 additional acres of land on Bellevue Ave in Newport from George Bancroft, a horticulturist and well-known statesman.

The Oelrichs demolished the home on the property and hired McKim, Mead and White, an architecture firm, to design their future estate. In 1898, construction on Rosecliff began, and by 1902 a majority of the building was completed. Theresa was impatient and began hosting events in the palatial estate prior to its ultimate completion in 1904.

Rosecliff is modeled after the Grand Trainon in France. The exterior walls of the home are made of brick and completed with a covering of white terra-cotta tile. The combination of the wide set terra cotta and the glazed finish give the impression of large slabs of marble. 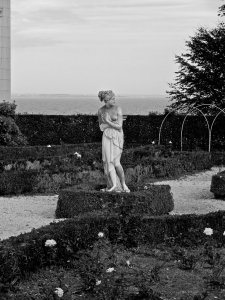 Within the walls of Rosecliff sits the largest ballroom in Newport. On the beautiful wood floors under the murals and crystal chandeliers, massive parties danced to music and gossiped about scandals in town and in New York City. The most famous party held by Theresa Fair Oelrichs was Bal Blanc in 1904. It was an all white party with endless white flowers hugging every inch of the home. Ladies wore white gowns and men wore black tuxedos. Mrs. Oelrichs had several white boats docked in the ocean outside the estate walls to give guests the feeling of the harbor. Theresa had a reputation for throwing the most extravagant parties in all of Newport. 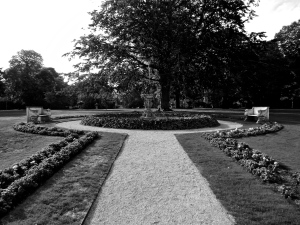 Sadly, two years after the party that set the tone for the Newport social experience, Hermann Oelrichs passed away at sea. Theresa kept Rosecliff and continued to live in the estate through her death in the 1920s. Many have said she started to lose her mind in the end, often seen wondering the halls talking to invisible guests attending her invisible events.

After her passing, her son Hermann inherited the home and kept it until its sale in 1941. By 1942, the estate fell in to decay. After being left unoccupied and not properly winterized, the pipes burst on the second floor flooding the home. The grand Rococo-style staircase was a giant, frozen waterfall and the ballroom ceiling cracked and caved. 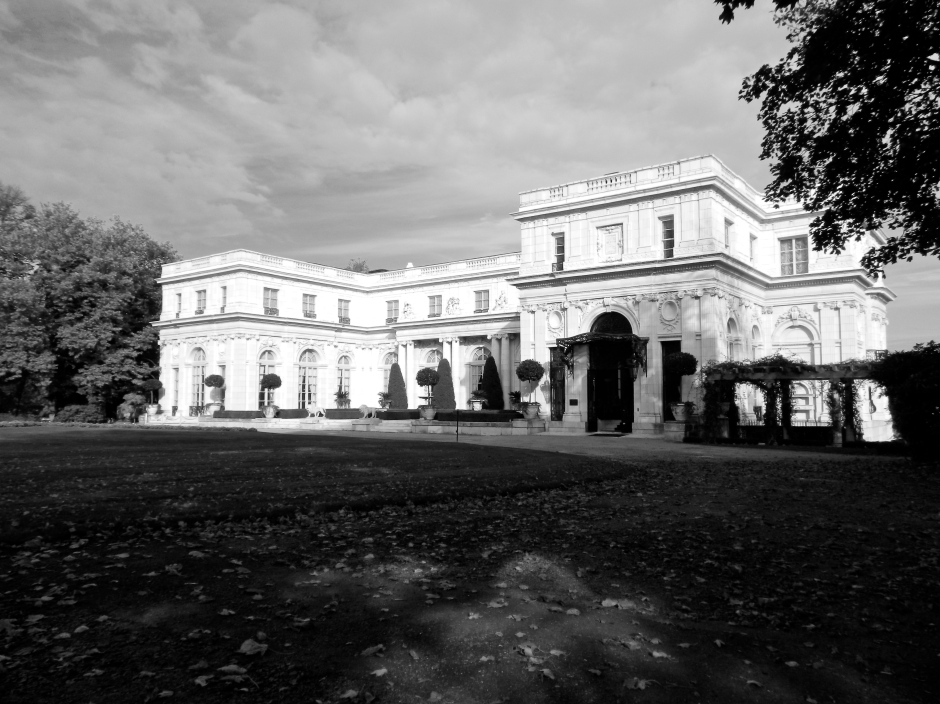 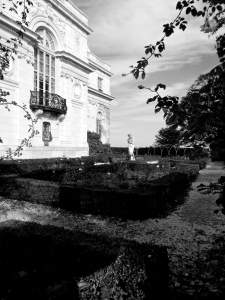 Rose garden looking towards the Atlantic.

Ray Alan Van Cleif soon purchased the home and began and extensive renovation to bring the brilliant residence back to its Gilded glory. Unfortunately, Van cleif never got to see Rosecliff once it was finished. While on his way to the home, he was in a fatal car accident.

In 1947, Mr. and Mrs. J Edgar Monroe purchased the home. They occupied the mansion each summer for 20 years until ultimately donating it to the Preservation Society of Newport County.  With the prestigious home, the wealthy family gifted all of the furnishing and donated a large trust fund to preserve the rose of Newport.

-For More Photos of Rosecliff-